In 1984 Bennett Ramberg, an expert on nuclear weapons proliferation, published a prescient book: Nuclear Power Plants as Weapons for the Enemy: An Unrecognized Military Peril.    He pointed out nuclear reactors, nuclear power facilities (NPFs) and spent nuclear fuels storage pools are potential targets of a conventional war and certainly of a war involving tactical or strategic nuclear weapons. 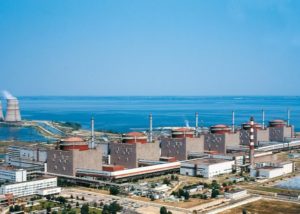 Reasons why a military might target these sites are obvious.  The threat of an attack on a NPF which might cause substantial immediate and long-term civilian casualties and radioactive contamination of a large land mass could force government and military leaders to surrender prematurely.  Also, in countries where a substantial proportion of electrical generation is from nuclear energy pressure from civilians could influence political and military decisions and might alter a country’s willingness to begin or continue fighting.  In WWII conventional power facilities and hydroelectric dams were targets of Allied bombing and put pressure on the German Army to surrender.  There is debate whether this tactic was successful.

Until recently Ramberg’s warnings were considered theoretical.  However, they have unfortunately been realized.  The Russian invasion of Ukraine has put the country’s 15 nuclear reactors at 4 locations at risk.  The most immediate concern is safety of the Zaporizhzhia NPF, the largest in Europe with 6 pressurized light water reactors fueled with uranium-235 and generating 20 percent of Ukraine’s electricity.

On 4 March, 2022, after a brief weapons exchange, Russian troops took control of Zaporizhzhya.  Anticipating the attack operators shut down several reactors as a safeguard.  The other reactors continue operating manned by Ukrainian technicians under the control of Russian soldiers and Rosatom, the state nuclear power company.  It seems only 1 or 2 reactors remain online.  Rosatom now claims ownership and threating to disconnect the Zaporizhzhia NPF from the Ukraine electrical grid.  This happened temporarily on 25 August but has now been restored.  Soon after seizing control Russian army units set up a military base at the reactor site installing self-prolled rocket launchers.

This was followed by a Ukrainian army drone attack which killed or injured several soldiers and facilities personnel.  Three of the four connections of the reactor complex to the Ukraine electricity grid are damaged or disconnected leaving only one backup to run the cooling pumps needed to prevent melting of the nuclear fuel.  There is also concern Russian troops are depleting onsite stores of diesel fuel used for backup generators as a third line of defense against a loss of internal and external electricity needed to run the cooling pumps.  A triple knockout is what caused meltdown of reactors at Fukushima-Daiichi in 2011.

Russia is now using the Zaporizhzhia facility to launch missile attacks against Ukraine believing the Ukrainian military would be reluctant to return fire and risk a nuclear disaster whose primary victim would be Ukraine.  Essentially, the Russians have turned Zaporizhzhia into a nuclear shield, a dangerous strategy in what might be considered an act of nuclear terrorism by some and a war crime by others.  Both designations are controversial.  On 11 August the facility was shelled several times with each party exchanging blame.  Inspectors from the International Atomic Energy Agency (IAEA) of the UN have so far been denied access to the facility but this may change soon.  Suggestions to make the facility a demilitarized zone have so far been declined by Russia.  A recent meeting at the UN Security Council made no progress to resolve these issues. 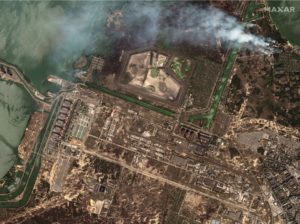 Potential medical consequences of an attack on a nuclear facility could be disastrous.  First, there would be immediate deaths from blast forces from weapons used to destroy the reactor complex, chemical releases and thermal injuries.    Next there could be deaths of persons at the facility and immediately nearby from high radiation doses if the reactor containment was breached.  Evacuation of the surrounding population might be needed like at the Chernobyl and Fukushima-Daiichi accidents.  Depending on the amount and distribution of radionuclides released one might anticipate increased cancers over several decades not only where the reactor is sited but wherever the radioactive plume spreads.  Estimates of excess cancer deaths after Chernobyl range from 4,000 – 9,000.  After the Fukushima-Daiichi accident many lives were lost because of disruption of normal health care services.  Lastly, a large area of radioactive contamination would result in huge social and economic consequences affecting human health as happened after prior accidents.  For example, an event in Ukraine would further disrupt the global supply of grains and could cause famine and deaths in Africa.

Lest readers see this threat as confined to Ukraine recall the radioactive cloud which spread initially over Europe and Scandinavia and eventually over the Northern Hemisphere after the Chernobyl NPF accident in 1986.  (The Zaporizhzhia reactors are of a much safer design than the Chernobyl reactor such that consequences from each Zaporizhzhia reactor would be less but the combined effects of 6 reactors could be the same or greater.)   In a worst case scenario an attack could precipitate a world war.  For example, recently, representatives of the UK and the US indicated a radiation release resulting from a deliberate attack against Zaporizhzhia which caused casualties in NATO member states would be a breach of NATO’s Article 5 and activate a coordinated NATO military response.  The threat we discuss is not limited to Ukraine.  North and South Korea, China and Taiwan, Israel and Iran and others have nuclear facilities at risk of war.

The 1977 Additional Protocol I to the 1949 Geneva Convention prohibits using a surrounding population as a shield to protect a military force operating from a civilian nuclear reactor.  Article 56 of Additional Protocol I identifies NPFs and dams as installations containing dangerous forces which shall not be made the object of attack if such attack may cause the release of dangerous forces and consequent severe losses among the civilian population.  However, Article 56 also states: Parties to the conflict shall endeavor to avoid locating any military objectives in the vicinity of the works or installations (a NPF).  Unfortunately, to endeavor is not to prevent.

The US has not ratified Protocol I and the Russian Federation withdrew ratification in 2019.  Almost all other countries have ratified the Protocol.  Failure of the US to ratify Additional Protocol I limits our ability to criticize Russian actions at Zaporizhzhya.  The present concern is the war in Ukraine but we would be short sighted if we fail to recall the US has 55 operating NPFs in 28 states and gets 20 percent of its electricity from sources.

A direct attack on a nuclear facility or using one as a shield is a global humanitarian threat.  As we discussed after the Chernobyl accident: A nuclear accident anywhere is a nuclear accident everywhere.  We desperately need a universal treaty prohibiting targeting civilian nuclear facilities or militarizing them as is happening at Zaporizhzhia.  It may be too late to save Zaporizhzhia but we need think about the future.