Overview
Brain computer interfaces (BCI) provide a direct communication link between the brain and a computer or other external device. The promise of BCIs is the extended degree of freedom they offer by either compensating for damage to the brain, or by strengthening human peripheral working capacity, and have potential applications in various fields such as rehabilitation, affective computing, robotics, gaming, and neuroscience, amongst others. 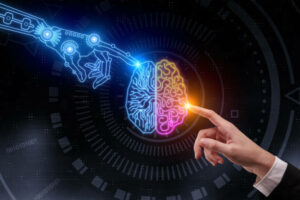 Types of BCI Systems
BCI systems can be categorized by the way they use the brain: Passive BCI decode unintentional affective/cognitive states of the brain, while active BCI directly involve the user’s voluntary intention-induced brain activity. By contrast, reactive BCI use brain waves generated in response to external stimuli. For example, detecting drowsiness in drivers, in order to prevent road accidents, is one example of passive BCI applied in a consumer setting. However, BCI systems driven by users’ intentional motor imagery visually evoked P300 produced by external stimulation can be considered active BCI and reactive BCI, respectively.  The choice of modality of signal acquisition has been used to divide systems into invasive and non-invasive BCI, respectively. Non-invasive BCI exploiting EEG are the most common, however invasive intracortical electrodes and electrocorticography (ECoG) have been used, providing a superior signal-to-noise ratio and better localization of brain activity.

More recently, advancements now allow both the decoding of neural activities and the delivery of external signals into targeted brain areas, either in order to induce plasticity or remodeling of neurosynaptic organization. Plasticity is now known to be an inherent characteristic of the brain and the peripheral nervous system, underpinning both BCI-based and other neuroscientific rehabilitation applications. While most BCI systems translate brain signals to computer commands, some systems utilize external stimulation modalities such as transcranial magnetic stimulation and transcranial direct current stimulation to stimulate specific brain areas.  Medical applications of BCI, require three criteria to be fulfilled: (1) a comfortable signal acquisition device, (2) clinical system validation, and (3) reliability and therapeutic validation of BCI. For the restoration of mobility in patients with motor impairments, invasive intracortical recordings typically show better BCI performance than non-invasive methods such as EEG. BCI performance in turn limits how efficiently a patient can perform functions such as a motor task or communication with an external device. Invasive modalities via BCI are also suitable for locked-in patients, because the potential benefits outweigh the risks associated with implantation.

While many factors influence BCI performance, of crucial importance are the underlying cortical-subcortical networks. Several issues can significantly impede BCI performance. The key to effectiveness is being able to maintain an acceptable signal-to-noise ratio, particularly in long-term recordings. Another challenge is that event-induced brain waves (or oscillations) are typically dynamic and are very often affected by unstable resting state networks (RSNs). Time-variant psychophysiological, neuroanatomical, and users’ fundamental can cause unreliable estimates of RSNs, due to short and long-term signal variation within and across individuals. Due to these intrinsic signal variations, BCI systems require subject-specific training, during which subjects attend a calibration session that can be tedious and often frustrating.

Challenges with Current Systems
Emotional and mental processes, as well as the neurophysiology associated with cognition and neurological factors play crucial roles in BCI performance. Psychological factors such as attention, memory load, fatigue and competing cognitive processes, as well as users’ basic characteristics such as lifestyle, gender, and age, can all influence instantaneous brain dynamics. Besides psychological traits, resting state physiological parameters, such as frequency-domain features of resting-state heart rate variability are also associated with BCI performance. Because the baselines of RSNs are often dynamic they can modify any observed cortical signature. Age also alters RSNs and associated cognitive responses.

Medical Applications of BCI
BCI can help patients who may suffer from amyotrophic lateral sclerosis, cerebral palsy, brainstem stroke, spinal cord injuries, muscular dystrophies, or chronic peripheral neuropathies, either by providing direct control of assistive technologies or by direct neurostimulation. In the case of the rehabilitation of stroke survivors, affected neural circuits, i.e., lesions are to be identified carefully, because brain responses fluctuate according to the spatial location of the stroke lesion. Although current neuroimaging methods are effective in capturing stroke lesion sites, case-specific BCI design that incorporates residual brain function is required for rehabilitative interventions. Neuroplasticity helps to assist cognitive and perceptual learning and is the main ingredient for neurorehabilitation. Rehabilitative BCI can be designed either by attaching neural prostheses to the impaired body parts or by re-stimulating the damaged synaptic networks; the idea is to exploit and promote neuroplasticity. Other examples of BCI-driven rehabilitations include deep brain stimulation applied into the subthalamic nucleus in patients with Parkinson’s disease, and treating major depressive disorder by BCI-driven transcranial magnetic stimulation.]

BMI and Affective Computing
Future computers may have emotional and perceptual capabilities, which could extend their use not only to assisting humans but also to making decisions. Computers might be able to recognize and interpret underlying affective states based on physiological and behavioral variables. Recent studies demonstrated BCI as a potential tool to investigate affective states, expanding its applications into psychology – for example an EEG-based BCI to detect positive and negative emotions induced by a video stimulus.  Studies have demonstrated that a user can fully operate video games by BCI. Multiple users can now participate in collaborative games, in which joint decision making is required to control the gaming environment. The aggregation of information from two individuals brain signals may lead to better decision making than only one. Collaboration can now assist an individual’s decision making by diversity inclusion, or by investigating how people interact in different social contexts, extending BCI applications into sociology. Virtual/augmented reality (V/AR) technologies together with BCI could offer immersive experiences, and BCI-driven robotic controllers could offer advanced assistive technology for people with mobility constraints, or augment human ergonomic performance in healthy subjects.

Summary
Groundbreaking advances in neurosensors and computational tools herald great promise for more sophisticated and user friendly BCI systems. In addition to hi-fidelity signal acquisition, significant progress in signal processing and machine learning tools combined with high computation power and increased mobility of computers have significantly contributed to the emergence of BCI technologies. Exploiting neuroplasticity, designing hi-fidelity and customized neural sensors, and applying advanced signal processing and machine learning techniques will be key aspects of effective BCI design in the future. However there are key factors pertaining to safety, ethics, privacy protection, and data confidentiality that also need to be considered to maximize users’ benefits and social impact.  For instance, it is critical to introduce a suitable act for lawful utilization of BCI and preservation of privacy and confidentiality of stored data. Recent studies have demonstrated decoding of password or recognizing faces utilizing consumer-grade BCI, prompting a concern for illegal access to users’ raw data. The future of BCI technology will rely greatly on addressing the following: